Rosewood was originally established by timber getters who were interested in the forests of the area which included rosewood, hoop pine, crows ash and red cedar.

By the 1850′s coal mining was gaining momentum in the area and several mines were developed between Rosewood and Ipswich. There is still one open cut coal mine working in Rosewood, but most of the others have now closed.

The Rosewood line was part of the first railway in Queensland, opening in July 1865.

The present Railway Station was built in 1918, and is now the limit of the electrified railway from Brisbane. The travel time to the city is about an hour and a half – probably less than it would take to drive the trip.

The Rosewood Railway Museum maintains a collection of working equipment, and here preparations are being made for an outing in “Red Fred” – rail motor No 55 built in the 1930′s.

These outings are organised once a month along restored track in the hills behind Rosewood, and visitors are welcome. 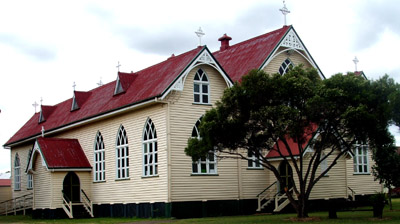 St Brigid’s Catholic Church was opened in February 1910 and is said to be the largest wooden church in Australia.

The church was designed by Father Andrew Horan, and is divided into a central nave and two side sections; each of which has a separate cross and gabled window. 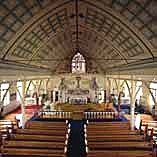 The church is decorated with detailed woodwork frescos and statues; all the furniture is wooden; and although the altar is finished to look like marble actually it is also constructed from wood.

Another interesting feature is the vaulted ceiling which is constructed entirely of wood, but which is covered with pressed metal.